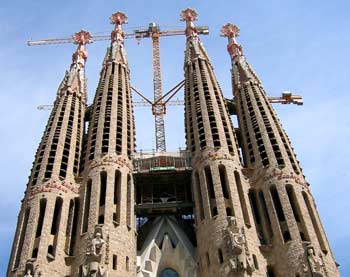 Barcelona: from the Sagrada Família to the Parque Güell

Recently Barcelona has gained a reputation as the ultimate city for a short break, and rightly so. The Catalan capital has an excellent climate, lots of sights, good hotels and restaurants, trendy shops and bars in profusion and beaches en mountains within a stone's throw. From northern Europe it's an perfect destination for a long weekend or a relaxing week in spring or autumn, both for culture lovers as for partygoers wanting to dance the night away. The following attractions rank among the highlights in this vibrant city in north eastern Spain.

Without doubt, the most famous building of Barcelona is the Sagrada Família, the still unfinished cathedral by Antonio Gaudí, the eccentric architect who has left his mark on Barcelona like no other, thanks to his extravagant designs. This church is situated somewhat away from the centre in a not very interesting neighbourhood, but a visit should be on every tourist's list. It's surely worth the effort to walk around the perimeter of this cathedral, that should be finished in about twenty years, a century after the architect's death. One of the projects that's still on the drawing board is the central spire, measuring 170 meters in height, meant to be a representation of Jesus Christ. 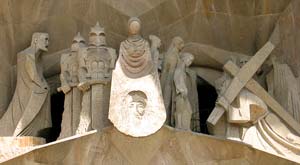 Take binoculars to observe the interesting decorations on the spires and facade. You will discover alienlike figures with helmets and some kind of drills in their hands, and beside them a Christ figure carrying his cross. Opinions differ about the attractiveness of the interior: It's an excavation site, according to some, but others say it shouldn't be missed. The long queues in front of the ticket booth and the steep entrance fee kept us from visiting the interior of the cathedral. It's a good idea to walk back to  La Rambla, the 1 km long boulevard from the Plaça de Cataluña to the harbour, where there's always a lot happening. 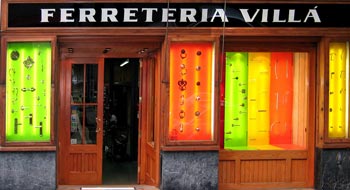 Street artists, elegant shop-windows and facades and a colourful crowd of tourists and locals guarantee you won't be bored quickly at La Rambla, the most famous street of Barcelona, consisting of five different segments. The more you're strolling in the direction of the coast, the more touristy the avenue gets. A sure sign are the numerous fast-food joints and sidewalk cafés and restaurants with somewhat too pricey dishes, mainly paella with lots of sangria. 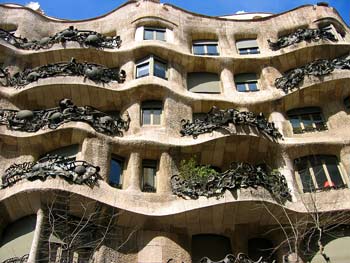 In every travel guide you'll find a walk along the buildings from the modernism period, and following the route you'll discover that the Sagrada Família is by no means the only bizarre building in Barcelona.
Not to be missed is Casa Milà of La Pedrera ("The Pit"), an undulating apartment buidling with cast iron balconies from 1912 which can be visited. One of the apartments is open to visitors and equipped with furniture from the beginning of the 20th century. 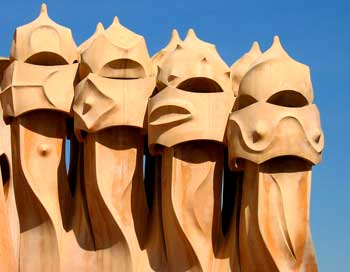 Don't forget to visit the spectacular roof which offers fantastic views over the city, along with the peculiar sculptures that seem to guard the building like soldiers. In fact these are the chimneys of the apartments.

Every self-respecting city has an extensive park offering the chance to escape the traffic noise, the hustle and bustle and the heat in summertime. In Barcelona it's the Parque Güell that fulfils this role and like many things here, it has a connection with Antonio  Gaudí's name. His plan for a new residential area formed the base for the layout of this park. if you're here on a Sunday afternoon, forget about walking around in peace and quiet because that's the time that half of the city population seems to gather here. Weekday mornings are better moments to enjoy the park, the unusual decorations and buildings and the views over the city. 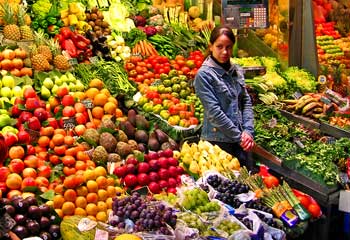 One of the most touristy, but surely one of the most colourful markets of Barcelona is the Mercat de la Boqueria, which has its main entrance on La Rambla. Here, presentation of the food products is almost an art form: fresh tuna fish, cured serrano ham, oranges and apples, everything looks very appetizing. It's an excellent place to buy ingredients for a picnic lunch on the city beach or on a bench along the Rambla.

One of the architecturally most interesting locations in Barcelona is the Hospital de la Santa Creu i de Sant Pau, a hospital consisting of around thirty pavilions, each with an unique appearance. It's no problem to enter the premises of this hospital and admire the modernist architecture of Lluís Domènech i Montanet from the first quarter of the last century, while busy doctors and nurses pass by and patients in wheel chairs are driven around. The hospital is situated in the neighbourhood of the Sagrada Família ans is definitely worth a visit. Don't wait till your next visit to Barcelona, because in the foreseeable future these buildings will have a change of use and it's not unthinkable that the peculiar charm because of the medical setting will be at least partly lost. 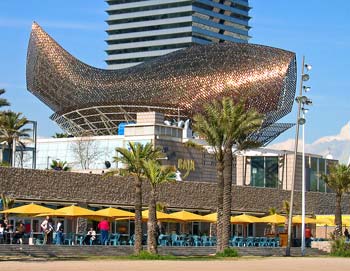 Barcelona has a quite acceptable city beach that's overcrowded in summertime but can be nice and clean on sunny days in spring or autumn. The open air cafés and restaurants along the boulevard are very busy at lunchtime with office workers, but if you can find a free seat, you will certainly enjoy the cheerful atmosphere. If you're looking for the pleasures of a real seaside resort, take one of many trains from Passeig de Gracia or Sants to Sitges, a town with an agreeable, in places even picturesque centre and good beaches at a distance of 35 km from Barcelona. 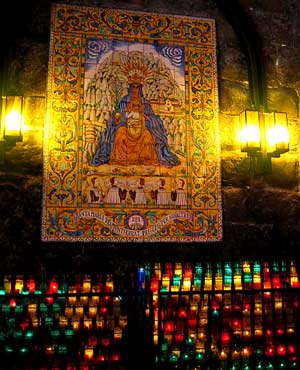 If you want to discover the countryside around Barcelona, Montserrat is an easy target for a daytrip. This place of pilgrimage, 40 km to the northwest in the Catalan mountains, is an easy trip by train and funicular. The monastery itself, with the famous Black Madonna with Child, is perfectly equipped to handle the big tourist crowds visiting this place every day and consequently lacks atmosphere, but the amazing mountain scenery makes this trip certainly worthwhile. 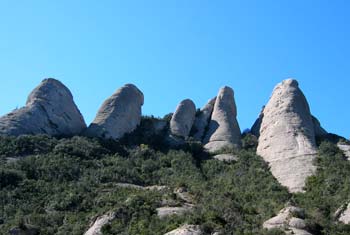 Close to the monastery you can admire bizarre rock formations and you will enjoy the wide panorama over the surrounding plain with vineyards and the Pyrenees in the background. The tourist information in the monastery has free leaflets with numbered walks along the numerous trails in the mountains, for example a walk along the hermitages in the rock faces. Don't forget that Montserrat is at an altitude of 725 meters, so it can be very cold in winter and spring; even in march, snow is no exception. In the railway stations in Barcelona you can buy combination tickets for the trip to Montserrat.

The cheapest service from the airport El Prat to the city centre (Plaça Cataluña) is by  RENFE-train; buy a T-10 booklet with ten underground tickets for € 10,30 in the ticket machine in the train station facing the airport terminal. These are valid for the underground and RENFE city train services. Barcelona has an efficient underground and bus system, a map in in PDF-format can be found on the local transport website.

Due to high demand, hotels are not cheap in Barcelona. As always, location is important. A hotel along the Rambla may sound attractive, but it can be very noisy because of the constant party atmosphere on this boulevard.

In Barcelona it's no problem to eat and drink well at reasonable prices, even at touristy locations (except the end of the Rambla, maybe). Almost every bar has a good choise of tapas (snacks) and there are countless restaurants. Take care: as a tourist, you'll have to ask explicitly for the inexpensive daily menu (menu del día); the waiters in almost all restaurants prefer to give you the menu with á la carte dishes. Reservations are a good idea in most places or you can try your luck very early, just after opening at around 8 or 8.30 pm. Around 9.30 pm many restaurants will be full of locals. Recommended restaurants are Brasserie Flo, a big establishment with an attractive interior and very efficient service (evening menu for € 23) and Restaurante Port Vell (Joan de Borbó 20), a good address for a cheap and filling lunch with outside tables at the old harbour.

Lonely Planet or the Rough Guide Barcelona are both good choices.