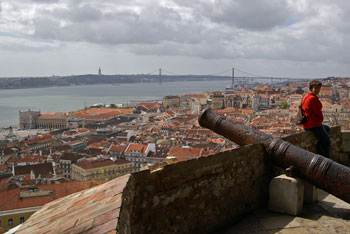 Lisbon: From the Bairro Alto and the Alfama to Belém and Sintra

Beautiful sights, narrow scenic alleys, historic trams and a modern subway, the longest bridge, nostalgic cafés and hypermodern shopping malls — you will find it all in Lisbon, a city full of contrasts where you can easily spend a week without being bored. Thanks to the mild climate, the Portuguese capital is an ideal destination for a city trip, even in winter. And when the summer heat is getting too much, you can always leave for the Atlantic beaches of Estoril or Cascais or the hills of Sintra for some cooler air.

Lisbon is really a city to wander in for hours. In the tangle of alleys in the historical districtof Alfama you will constantly discover new views, picturesque alleys and atmospheric pubs, giving youthe impression of walking around in a small village (While this is quite a large city.) Climbing up the hill you will be rewarded with magnificent views from one of the many miradouros of the city. You will see the river Tagus in the distance, spanned by the majestic Ponte 25 de Abril, the almost 2,5 km long suspension bridge that was built in the 1960s and was originally named Ponte Salazar, after the Portuguese dictator. The climbs and stairs in this area can be pretty tiresome, but luckily there will always be a tram, bus or subway nearby to bring you back to your hotel. 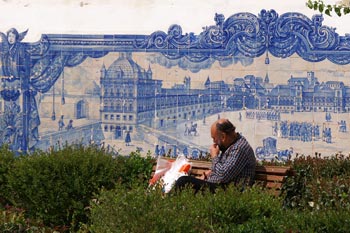 Walking around the city, you wil certainly notice there are azulejos everywhere! It's these painted tiles that have given the city its fame. The tiles often contain geometrical motifs, a reference to the Moorish past. In the 14th and 15th century this craft was brought to Portugal from Spain, and it quickly evolved into an important industry, with beautiful results. When visiting the Miradouro Santa Luzia, with beautiful views over the district of Alfama and the river Tagus, you can admire a blue azulejo-wall of the Praça de Comércio as it looked before the destructive earthquake of 1755. 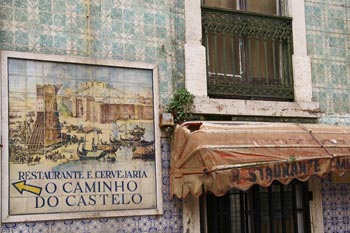 Many of the walls with azulajos decorations in the center of Lisbon are detoriating, especially the walls on private houses. Luckily at some places there are restorations in progress. There are still workshops in Lisbon where azelejos are painted by hand, but nowadays they are mostly produced by machines. 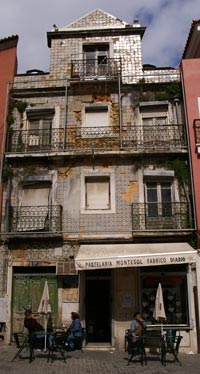 The earthquake that hit Lisbon in 1755, followed by a tsunami and devastating fires, didn't leave much of the city left. The Baixa, the lowest lying area of the city, had to be completely rebuilt, an enormous task that was carried out under the guidance of Marquês de Pombal (a reoccurring name in Lisbon) who developed a street plan based on a chessboard. There are no twisting alleys, as in the Alfama or the Bairra alto (the other two central districts). The old city center is an excellent place for a shopping spree, with its many jewelers and fashion boutiques. But there's also the old fashioned yarn shop. 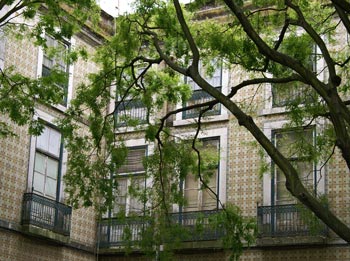 At night the area is pretty much deserted, apart from the restaurants. There are only a few thousand people who live here nowadays because most of the properties have been rebuilt into offices- and shops. In the Baixa there's also the famous café A Brasileira, with a statue of the famous Portuguese poet Fernando Pessoa that is popular with photographing tourists. It is here where the word 'bica' originates from, the usual term for an espresso coffee in Portugal. 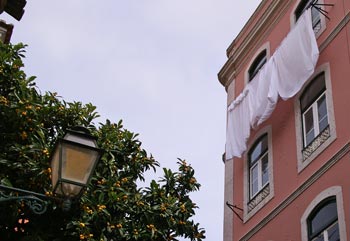 Much livelier than the Baixa is the Bairro Alto, at least at night, because this is a famous pub district. Here you will find the most fashionable bars and clubs and you can stroll from pub to pub until the wee hours of the night. There are many trendy shops and galleries here, often right next to old decaying buildings that still have to be restored. 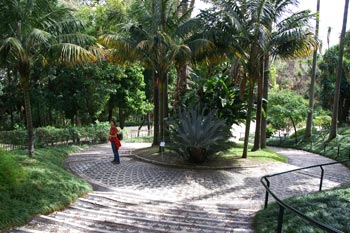 If you're fed op with the busy streets and narrow alleys, head to the spacious Botanical Gardens behind the Praça do Principe Real, where you can wander between exotic plants from all over the world. The gardens, which belong to the University of Lisbon, are an oasis of peace with rarely more than a few visitors around. The benches alongside the paths are excellent for picnics, which you have to bring along yourself. 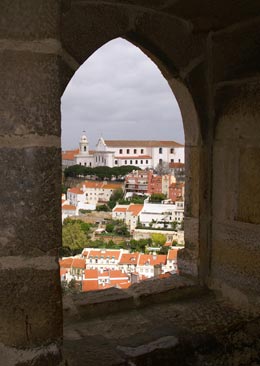 For excellent views over the city you can walk from the Praça de Comercio, the big plaza alongside the Tagus, to the cathedral (Sé) up to the Bairro de Castela, that is crowned by the Castelo de São Jorge, a roman castle where the Portuguese royals lived until the end of the 15th century. 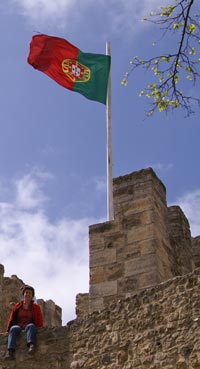 It is definitely worth to buy an entrance ticket (€ 5) and explore the castle and the surrounding park, only because of the breathtaking views over the city and the river Tagus. After visiting the castle you can descent alongside the Pátio D. Fradique through the Alfama and eventually you will reach the Museu do Fado. Here you can find out everything about the national Portuguese music. 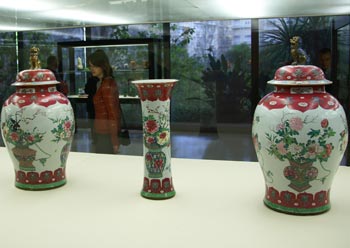 If there is one museum in Lisbon that is definitively worth a visit, it would be the Museu Calouste Gulbenkian. The name might sound a bit obscure, but the Armenian art lover Gulbenkian was one of the richest people of the 20th century. He partially spent the money earned in the oil industry on real masterpieces from art history. Gulbenkian spent the evening of his life in Lisbon and gave away his art possessions to a foundation that now manages the museum. It's amazing to see how one man has managed to build up such an impressive collection of art, from porcelain from the Far East and carpets from Persia to paintings from Rembrandt and Renoir. If you are only slightly interested in art, you should definitely spend some time in this museum! 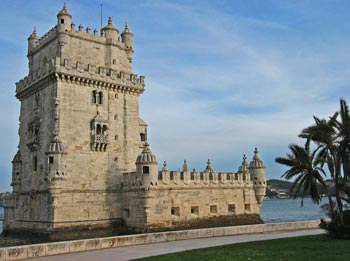 The most famous attractions of Lisbon are not to be found in the city centre, but a few miles down the Tagus in the district of Belém, where Portuguese pioneers, including Vasco da Gama, set sail to uncharted waters. Together, the Torre de Belem (Belém Tower) and the marvelous Mosteiro dos Jerónimos (Jerónimos Monastery or Hieronymites Monastery) represent the power

and wealth of the Portuguese empire. The tower is a striking structure that was built in the early 16th century in Manueline style (Portuguese late gothic). it was destroyed during the invasion of Napoleon and reconstructed in 1846. The tower was once used as a prison and is open to visitors.
The biggest attraction of Lisbon, the Mosteiro dos Jerónimos, is also built in Manueline style. It is often very busy here with tourist groups, but despite of this the church and monastery are definitely worth a visit. The cloister hall has been designed in pure Manueline style, and the monastery is on UNESCO World Heritage List. The royals of the powerful Avis dynasty are buried here, just as Vasco da Gama, whose sarcophagus can be recognized by the globe, carvel and crusader emblem. 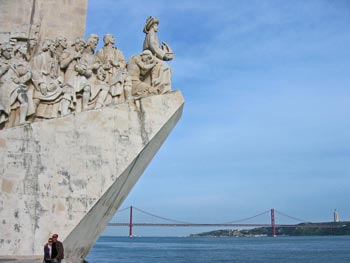 Opposite the Church, on the other side of the park, is the impressive Padr&atildelo dos Descobrimento, a testimonial to the illustrious Portuguese history. On top of the monument, built under dictator Salazar, the seafaring heroes of Portugal are depicted in life size. With the Ponte 25 de Abril on the background it forms a characteristic landmark along the shore of the Tagus. 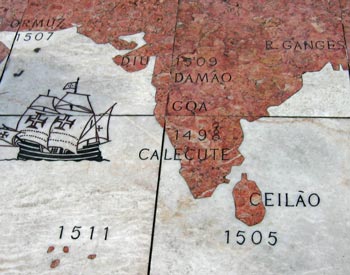 Also pay attention to the world map that has been made into the pavement, a gift from South-Africa to Portugal. On this world map all the discoveries and corresponding dates can be found. 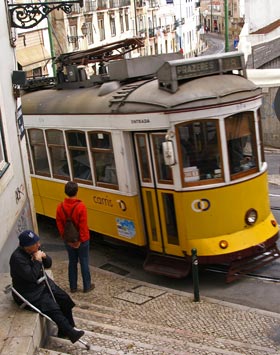 The trams of Lisbon are a special attraction. They are an excellent form of transport in the hilly, narrow city streets. A ride on a old fashioned tram that fights his way up the steep hills (up to 13%!) is an unforgettable experience! One of the most popular rides is line 28, from Praça Martim Moniz to the Cemitério dos Prazeres, that winds through the districts of Alfama, Chiado and Bairro Alto. 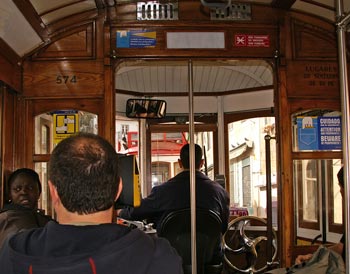 Just as interesting are the Elevadores, cable trams that climb extremely steep hills between two districts. There is the Elevador da Glória between the Praça dos Restauradores and the Rua S&atildelo Pedro de Alc&atildelntara, where the Miradouro gives an excellent view over the S&atildelo Jorge castle. It's a pity that most of the carts are smeared on with graffiti. The Elevador Santa Justa that connects the districts of Baixa and Chiado is not a cable tram but an elevator that goes straight up. 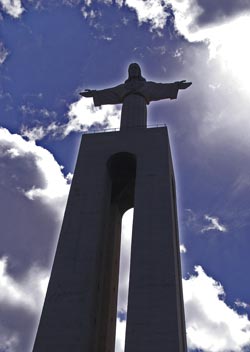 The ferries across the Tagus offer an excellent chance to see Lisbon from the river. Take the ferry to Almada on the south shore of the Tagus and than the bus to the colossal statue of Cristo-Rei, built in 1959 to the model of the famous the statue in Rio de Janeiro, that watches over the Ponte 25 de Abril. You can walk to the statue too, but be sure to stay close the Tagus, because the route through the center of Almada isn't exactly nice and takes a long time. The monument is 110 meters high and can be climbed, but even from the cape you have an excellent view over Lisbon. Strong winds aren't an exception here and you can hear the wind whistle through the bars of the suspension bridge that is quite a distance away. 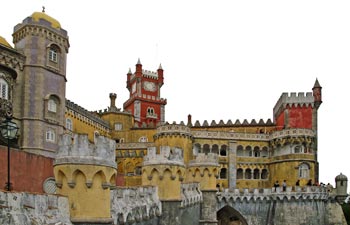 An excursion not to be missed for visitors of Lisbon is the village of Sintra with the royal castle, the Palacio Nacional da Pena. Although the village and the castle have been completely confiscated by tourism they are definitely worth a visit, if only for the beautiful park with its exotic vegetation of ferns and magnolia's. The excessively furnished castle is altogether an extreme example of kitsch architecture but definitely worth a visit. 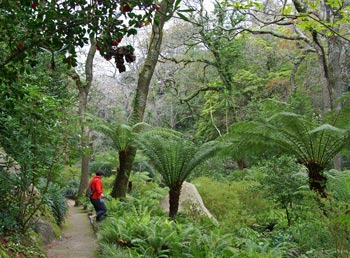 The castle was built in the 19th century by king Fernando II who built it for his wife Dona Maria II. The royal family hardly spent any time here because the wind and the fog made it rather unpleasant to stay.
And the weather is certainly a factor to take into account. Even when the sun is shining in Lisbon there's a high chance that near the castle you'll encounter rain clouds or mist veils, caused by the moist air from the Atlantic ocean colliding against the hills just behind the beach. Be sure to bring warm and waterproof clothes when visiting Sintra in winter and spring!

Airport: from the airport, which is not faf from the city, a taxi is only around € 10-12 and a lot faster than public transport.
Public transport: Metro, bus and tram are excellent and you can easily get around. There are frequent connections with surrounding towns and villages like Sintra (trains from Rossio station) and Cascais (train from Cais do Sodré). The fare system is rather complicated, so buy a 24 hours ticket for € 4,60, valid for bus, tram and metro. You have to load this on a reusable chip card (€ 0,50), and you have to validate the card when you enter a bus, tram or metro station. A seperate ticket is necessary for the Tague ferries to Almada. 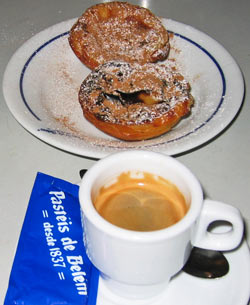 Portuguese cuisine is not very refined, but there's a wide selection of restaurants in Lisbon, from simple eateries to posh affairs with a pricey menu. If you fancy the national dish bacalhau (codfish)head for A Casa do Bacalhau in the Rua do Grilo 54 (take a taxi), where this fish is served in more than 20 different ways.
Don't forget to visit Pastéis de Belem in Belém, a famous and very busy pastry shop annex café with more than 500 seats in a maze of rooms. Here everybody orders the pastéis de nata, puff pastry filled with cream and sprinkled with cinnamon. You can follow the preparation of these delicacies behind a glass wall. Fascinating!