City trip Nice and Monaco: the best of Southern France 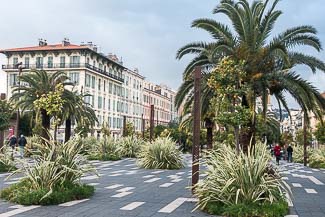 With illustrious places like Nice, Cannes, Monte Carlo and last but not least St.-Tropez, the Cote d'Azur is known as a playground of the rich and very rich, but as an ordinary tourist you can also have a great time there, also or even especially in winter. Nice, with its busy airport and pleasant city centre, is a great destination for a city trip, and thanks to the railway line along the coast you can easily get around and take a look in Monaco, Menton or even Ventimiglia and San Remo across the Italian border. 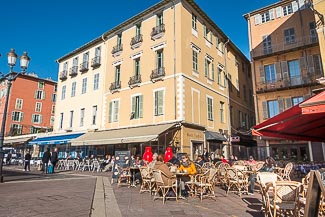 Thanks to the mild climate you can visit Nice in the wintertime, when the weather is often more stable than in the rather wet spring; the terraces are often inviting enough in January and February as well. Book your ticket and fly to the south coast of France! 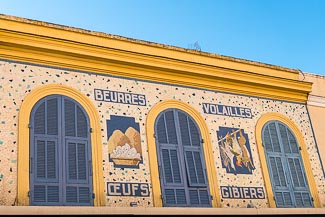 The heart of Nice is the Vieille Ville, the historic centre by the sea with its squares and ochre-yellow houses that unmistakably exude an Italian atmosphere - Nice belonged to the Italian House of Savoye-Piemonte for a long time until 1860. Here you will find speciality shops full of trinkets and products from the region, such as Provencal olive oil and herbs. 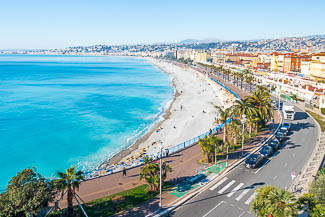 View of Nice from the Tour Bellanda

For the most beautiful view over Nice, the beach and the Mediterranean Sea you can take the lift from the Rue des Ponchettes in the Vieille Ville to the almost 100 meters high castle hill. Sometimes the lift is closed and then it's quite a climb, but the panoramic view from the Tour Bellanda and higher on the city of Nice, the beach and the azure blue sea is unforgettable. 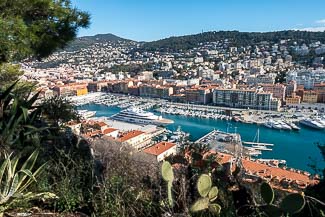 The marina of Nice

In the park at Colline du Château you can walk among subtropical flora and even have a view of the snow-covered Alpes Maritimes in the northeast. It is possible to descend on the other side to the marina, an excellent area to have lunch in one of the many brasseries. This is a beautiful walk through an often surprisingly quiet park, where you can also see a magnificent waterfall and remains of the old castle. 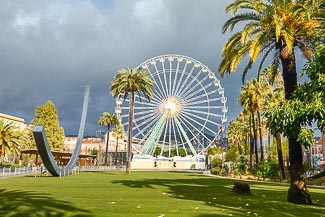 Ferris wheel at the Place Masséna

The old town and 19th century Nice are seperated by a long and fairly wide green area, from the famous hotel Négresco on the Promenade des Anglais to the MAMAC museum. Once upon a time the river Paillon flowed here, separating the old town from the new districts, but nowadays it runs underground. Stately palms, water features and classic hotels on the flanks give this green alley a grand mediterranean allure. Weather permitting, it's very busy here at lunchtime, when the many surrounding offices are emptied. 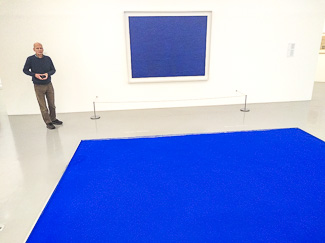 The collection of the striking MAMAC Museum of Modern Art at the end of the green zone is rather variable in quality, but not to be missed here are the rooms with the world famous intense blue of Yves Klein. The panoramic view of the city from the museum roof is also worthwhile. A 24-hour ticket for most museums in Nice costs €10, and in addition to the MAMAC it offers access to the Villa Masséna, the Palais Lascaris, a charming city palace with beautiful murals decorated as a museum for musical instruments, and the Musée des Beaux-Arts. 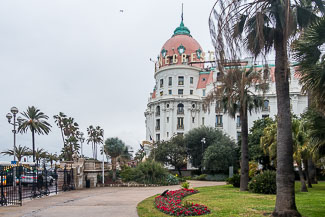 Hotel Négresco from the garden of Villa Masséna

Villa Masséna has beautiful Belle-Époque style rooms and an English garden, where a memorial has been erected to the victims of the 2016 terrorist attack. Next to the villa stands Hotel Negresco, traditionally a famous place to stay for the rich and famous. Rooms from € 450 per night, no access to the beautiful interior if you have nothing to look for. You are of course welcome for a glass of champagne in the bar for € 26, or even betterl 2 glasses with 30 grams of caviar for € 250. 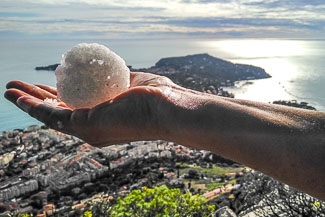 After the hailstorm, view of Cap Ferrat

Along the coastal strip near Nice you can make beautiful walks, with the railway line along the coast providing good services. From Baulieu-sur-Mer you can hike uphill to Saint-Michel and then descend to Èze-Bord-de-Mer, a 6.5 km hike. Along the way you have beautiful views over the coast and especially on the Cap-Ferrat peninsula (see maps for gpx file). 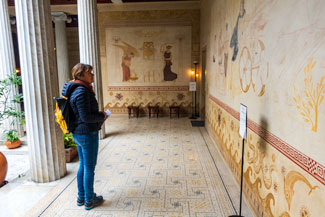 Close to the station of Beaulieu-sur-Mer is the Villa Kerylos, a carefully recreated antique Greek villa with beautifully decorated rooms from the beginning of the 20th century, and 2 km away at Cap Ferrat you will find the Villa Ephrussi de Rothschild, famous for its beautiful Mediterranean garden. 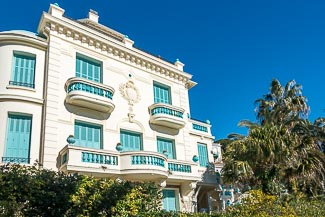 Villa along the coast near Nice

It is possible to walk all the way around Cap Ferrat, but because of the high hedges and fences around the villas of the VIPs here the view is rather more limited than you would like.

Between Cap d'Ail (train station) and the dwarf state of Monaco, a coastal path of about 6 km has been laid out that leads past villas, beaches and rocky coastal strips. At Cap Rosogno you can possibly walk a little higher up the slope, which provides beautiful views. 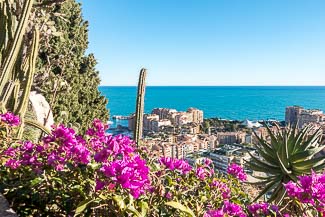 View of Monaco from the botanical garden

Once in Monaco you can walk to the beautiful Jardin Botanique (botanical garden) high (140 m) on the densely built slope, but in the chaotic maze of streets it is difficult to keep to the right direction. There are some elevators here and there, with which you can cut off a lot, but then you have to know where to find them... From the botanical garden you have a magnificent view over the old city of Monaco with behind it Monte Carlo and the casino. The perfectly maintained garden is specialized in succulents and cacti and is therefore also worth a visit in winter. It seems that there are heat cables in the ground to protect the most vulnerable plants in winter. 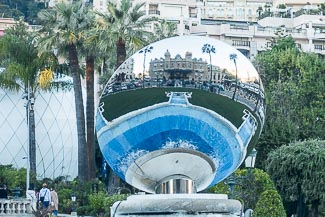 The casino of Monte Carlo in the mirror

Apart from the Vatican, Monaco is the smallest independent state in the world. The territory is almost completely filled with ugly flats full of tax refugees. Nevertheless, a visit is worthwhile, because the flair of the nouveaux riches is nowhere more evident than at Place du Casino, where one Porsche or Bentley after the other drives by and the gamblers allow themselves to be admired by the crowd gathered together. A remarkable spectacle, which can be observed from the terrace of the Café de Paris. Before you can sit there, you'll be searched. Count on a minimum of € 12 for a cappuccino and € 17 for a beer. 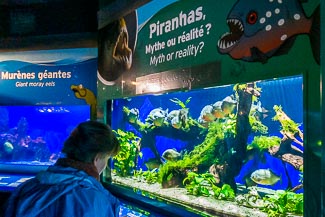 At the piranhas in the aquarium

In addition to the casino, Monaco has another real attraction of note, namely the Musée Océanographique de Monaco. This aquarium and maritime museum was founded in 1906 by Prince Albert and is housed in a monumental building by the sea in the old town. The aquariums are of great class and the oceanic museum is also worth a visit. At the aquariums explanations are given on tablet screens, and fortunately they are not broken here, as in many museums. Every hour there is a sound & light show in the hall with the whale skeleton. Don't forget to climb the stairs to the roof, the view of the sea, city and mountains is impressive.
Tip: the streets of Monaco are always congested and parking is difficult and very expensive. Take the train for a visit to the Principality. If you show your train ticket at the ticket office of the aquarium, you may get a discount. 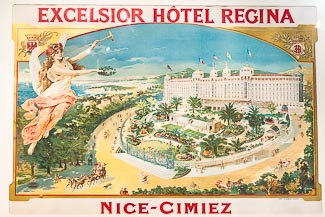 A good and affordable hotel in Nice is Ibis Styles Nice Centre Gare, conveniently located a few hundred meters from the train station and not far from most attractions.