Cycling along the Danube, from Passau to Vienna 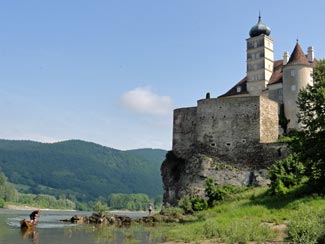 The cycle route along the Austrian Danube is one of the most popular in all of Europe, and rightly so, because it is a varied route of great cultural and natural beauty. This popularity has advantages and also some disadvantages. The crowds can be a bit frustrating during summer weekends for fast cyclists, when you will be forced to cycle in a long traffic jam of recreating families and elderly people. On the other hand, all those cyclists get the red-carpet welcome: the signposting is excellent, the cycle paths are smooth and there is an abundance of facilities for cyclists: everywhere you find bicycle-friendly accommodation, cafés and restaurants. It’s pleasant everywhere along the schöne blaue Donau! Despite all the road signs, it is useful to have a route guide at hand, such as the Danube bike path from Bikeline. 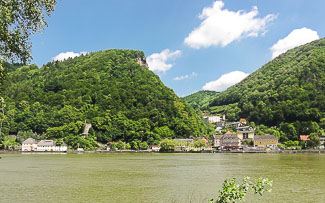 Slopes along the Danube

The distance from Passau to Vienna is around 320 km, and the route is almost entirely flat. You can ride this distance in two days or take a week or even longer, because there is a lot to see along the route. Castles, picturesque wine villages, green hills and of course the beautiful city of Vienna, which in itself is worth a multi-day visit. 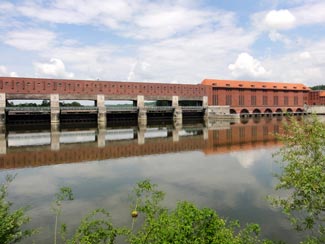 Finally we have crossed Germany on our cycle route to the Black Sea - a project of many years - via Rhine, Main, Altmühl, Tauber and Donau (the Limes route), and reach the German border town of Passau after we have crossed the Danube river via the beautiful Kachlet hydroelectric power station, built in 1928. Through the windows of the central we have a good view of the turbines. Passau is located at the confluence of three rivers: the Danube, the Inn and the Ilz, and at the end of the peninsula on which Passau lies, the Dreiflüsseeck, you can observe this in a quite spectacular way. We are here just in time; a week later, when we have fled the Danube due to the wet weather, we see on Hungarian television how the low-lying parts of the city are completely flooded in this extremely rainy spring months. 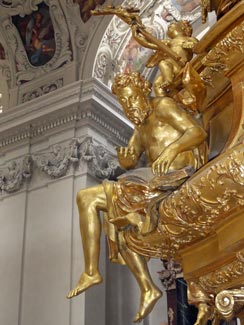 Pulpit in the Passau cathedral

Passau is a pleasant town with picturesque squares. The baroque St. Stephen's Cathedral is especially worth a visit. The organ is the largest dome organ in the world, with nearly 18,000 pipes. I’ts an impressive experience to witness a performance on the organ; between May and October you can listen to the organ every working day at noon, for an entrance fee of a few euros.Anyone who starts the Danube cycle route in Passau may be shocked, because the first kilometers after the city lead along a busy road, which makes cycling not very attractive. Fortunately, this changes from Obernzell, where the motorway bends to the left. We ride along a narrow road to the Jochenstein hydroelectric power station, half in Germany and half in Austria. 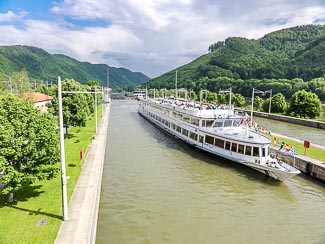 In the coming days we will pass a number of similar power stations in the Danube with common features: the current disappears and up to the power station the river gets the characteristics of a stretched lake, surrounded by increasingly higher dikes. Then, at the location of the power station, there is a steep drop in the cycle path of about ten meters, after which we cycle almost flat again for a few kilometers. At these power stations it is always interesting to take a look at the lock complex, especially when a cruise ship or cargo boat is locked through. 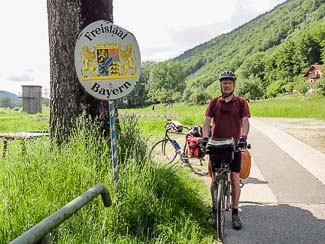 About 22 km from Passau we cross the border between the Freistaat Bayern and Austria. The Danube meanders considerably in this region and the winding cycle path takes us along wooded hills to the jetty of a traditional foot ferry that takes us across the Danube to the hamlet of Schlögen. 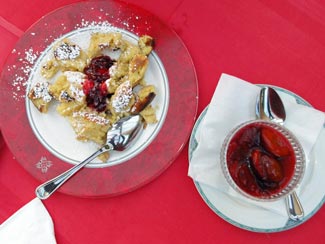 The Schlögen campsite, which is also connected to a hotel, has a good restaurant with a beautiful view from the terrace. After the main course we still have appetite for the traditional, very nutritious Kaiserschmarrn with plum compote, the favorite dessert of Emperor Franz Joseph, served by waitresses in traditional Austrian clothing. This is Austria at its best! 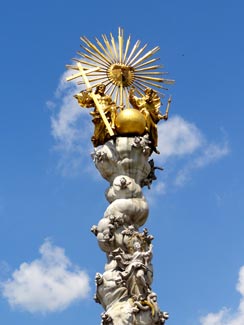 Via the historic town of Aschach we reach Linz, a fairly large city with a beautiful central square, surrounded by streets with beautifully restored buildings. The eye-catcher on the square is a huge Trinity Column, erected in the 18th century after the city had survived war, plague and destruction by fire. Shortly after Linz, due to a lack of time, we have to choose between a visit to the granite quarry at Mauthausen concentration camp (left bank) or the Roman remains in the town of Enns (right bank). We choose Enns, mainly because we have been cycling along the border of the Roman Empire since Katwijk in the Netherlands, following the Limes route. The ruins of the Roman house don’t deserve a detour at all, but we realize once again that we are still following the footsteps of the Romans. We spend the night at the simple campsite of Au an der Donau, where we dine in an equally simple restaurant with tasty dishes. 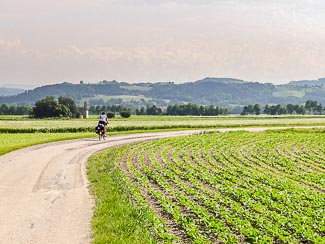 Field along the Danube

The landscape is much flatter in this region (Au = flood plain), but when we cycle towards Grein, the steep hills reach as far as the Danube banks again. Cycling is pleasant here, with an occasional view of a village, castle or church between the wooded slopes. We make good speed on the flat cycle paths and we arrive in Melk in the early afternoon. 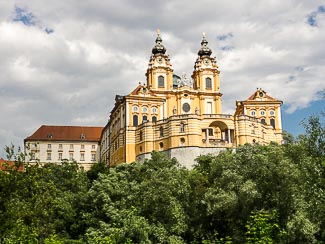 The baroque abbey of Melk

We have plenty of time to explore the town and climb the hill to the famous Benedictine monastery, which has become even more famous after the release of Umberto Eco's novel In the Name of the Rose. Almost half a million visitors come here every year, but fortunately the crowds are not too bad at the beginning of June. We have to save a visit to the huge monastery complex till another time, but through a side entrance we can take a look at the extremely lavish baroque church. 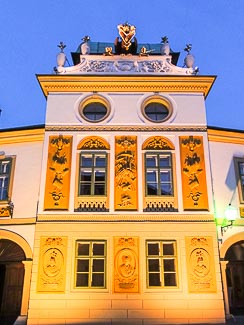 We visit the rococo-style garden and the pavilion, where the walls are painted with imaginative frescoes. Further on, in the English landscape garden, we enjoy a panoramic view of the Danube. In the evening the monastery and various houses in the village are enchantingly lit -- an unmissable attraction.Hardly recovered from all this splendor, the next morning we pass another photogenic object, the fairy-tale Schönbühel castle in the Danube. It can’t be visited, and therefore we continue our way after a short break. Surprisingly enough the road suddenly starts to rise steeply. The climb turns out to be rather short and soon we paddle along the river again. We are now in the Wachau, a region with a mild climate, favorable for viticulture and fruit growing (apricots). Wine villages such as Rossatz and Furth make a prosperous impression. 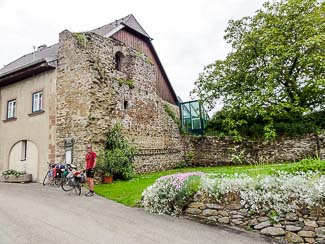 In search of a Roman tower in Barcharnsdorf, which is described in our route guide, we leave the bike path along the Danube and discover that it’s quite nice to follow the motorway for a change. There’s not a lot of motorized traffic in this region, and away from the Danube and the cycle path, which usually avoids the village centers, we experience a little more of the daily life in the vilagges. 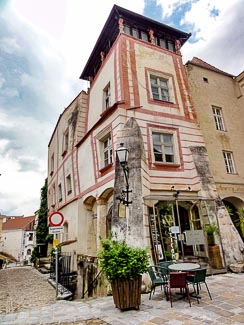 The weather has changed for the worse, and while just ten kilometers away from us a tornado causes havoc – without us noticing anything, except for continuous heavy rain – we ride through the old Roman army town of Mautern and the historic town of Krems to the campsite from Klosterneuburg, where we stay for a day to visit Vienna again.Read also the sequel: from Vienna to Budapest.

* Including detours for groceries etc.

The cycle route along the Austrian Danube is described along both banks in the Bikeline route guide Donau Cycle Path 2 (2017), from Passau to Vienna.

The Danube is one of the tourist highlights of Austria. Hotels and campsites are plentiful; in the high season it is certainly advisable to reserve a guest address. There is usually still a place for cyclists at campsites.

Austrians like hearty food and often drink wine (Grüner Veltliner is the most popular white wine) instead of beer, as in nearby Germany. Do not be surprised if you see plenty of guests eating a hot meal in a cafe or restaurant on Sunday morning at 11 a.m.