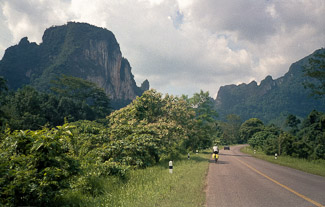 Cycling in Southern Thailand from Bangkok to Krabi

At first glance the route from Bangkok to Southern Thailand seems ideal for a relaxed cycling trip: mostly flat, but with spectacular mountains in sight, many villages and towns with facilities for travellers and beaches and the sea always at a short distance. And this turns out to be the case: cycling is very pleasant here, with only a few more demanding stretches. 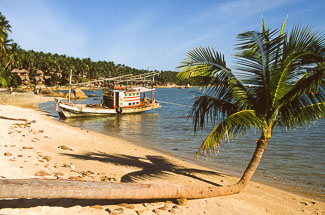 At the narrowest point, the Isthmus of Kra, Thailand is only 12 kilometres across and there you'll find only one road: the four-lane Highway nr 4. Fortunately there's a wide shoulder so cycling isn't particularly dangerous, but it's far from nice due to the heavy lorries racing along the highway. To our surprise, we discovered that almost anywhere else there are quiet alternative roads for Highway nr 4. If you succeed in finding all these roads, you will have to cycle no more than 100 km on Highway nr 4 — the total distance from Bangkok to Krabi is around 1000 km.

Sometimes it's a real challenge to locate the minor roads leading in a southern direction. The Thai maps we used lacked detail at important places and sometimes we had no idea if an unexpected turning was eventually leading in the right direction, so some trial and error was inevitable. The locals are very helpful, but generally they will point you to the highway, which is fast and smooth... Anyway, when we were lost, there was always someone willing to help, sometimes even leading the way for several kilometres on his moped to the right junction. 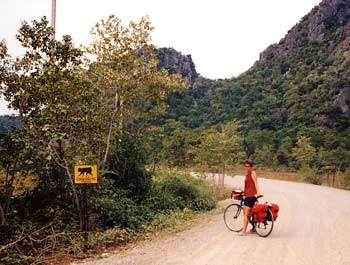 Away from the highway you'll discover the beautiful countryside with wonderfully quiet roads, sometimes without any traffic and usually in excellent condition. Most tourists skip this area and take the AC night bus from Bangkok to Phuket or Ko Samui, so you'll get to know the real, non-touristy Thailand, with hospitable people, green, fertile fields and beautiful, deserted beaches. There's no lack of accommodation: every country town has one or more simple hotels. Food is plentiful and delicious, as always in Thailand. 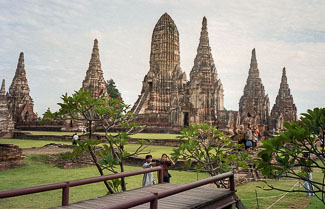 Bangkokd new airport Suvarnabhumi has finally opened. Regrettably it is not as close to the provincial town of Ayuthaya as the old Don Muang airport, but it's still a good idea to settle here for a few days if you just arrived by plane from Europe or the States. Ayuthaya is much quieter than hectic Bangkok and a nice place to acclimatize to the tropics. There are many hotels and guesthouses and the town and surrounding plains are ideal for leisurely cycling tours between the famous temple complexes. 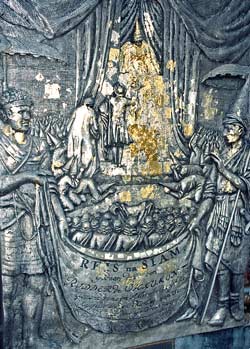 Once Ayuthaya was an important trading centre of the Dutch East India Company (VOC), but there aren't any remains left. The only traces we could discover of our illustrious fellow-countrymen were a few Dutch phrases on exhibits in the Chao Sam Phraya museum of Ayuthaya, which is certainly worth a visit with its modern presentations (pictured right; below an enlargement of the text.) 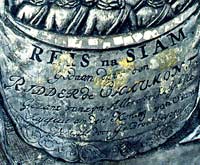 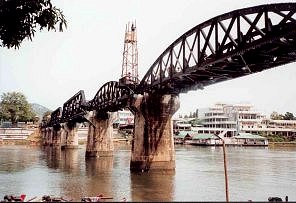 From Ayuthaya it is recommended to cycle southward with a western detour to Kanchanaburi and Petchburi, completely avoiding the busy traffic around Bangkok. The main attraction of Kanchanaburi is the bridge over the river Kwai, well known of the movie of the same name and of ill fame due to its connection with the Burma railway that crossed the river here. Nowadays you can cross the river on the tourist train linking Bangkok and Kanchanaburi -- a scenic trip. Kanchanaburi itself isn't a very exciting town, but there are lots of activities in the surroundings: hiking, rafting and cycling are all popular. A typical phenomenon are the disco boats which are incredibly noisy at night, ruining the atmosphere on the river, so be careful when looking for accommodation along the seemingly idyllic river banks. Especially in weekends karaoke songs thunder out of the enormous speakers on the disco boats, filled with revelling Thai tourists. In the cooler "winter" months it's preferable to ride the route along the narrow peninsula from north to south because of the north eastern monsoon winds. In November 2000 we took advantage from a constant tail wind that allowed us to ride along the highway at high speed. In this season the weather is mainly dry, though thunder storms occur and it can be rather sticky and cloudy with temperatures around 30 °C. 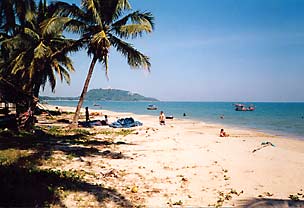 The coast is never far away when you're riding southwards. There are many minor roads leading to quiet beaches. Some are a bit more developed, like the beach at the air force base of Prachuap Khiri Khan and Thung Wua Laen near Chumphon. These are frequented mainly by Thai families spending their Sunday afternoon eating and drinking while relaxing in beach chairs under parasols. If anyone takes a swim, it's usually with all their clothes on. 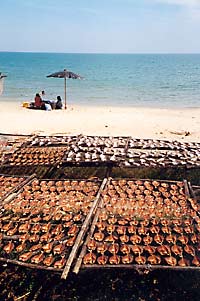 In weekends these beaches are lined with stalls selling all kind of snacks and meals, but on weekdays they are deserted except for local fishermen repairing their nets and boats. In places a distinct smell spreads from the racks with drying fish and squid. Except for the beaches of  Cha'am and Hua Hin, which are frequented by holiday makers from Europe, you won't encounter many westerners. The beach of Bang Saphan has good accommodation and is recommended. One day cycling further on there's the Chumphon Cabana Resort on Thung Wua Laen Beach near the town of Chumphon with nice bungalows in a setting of a tropical greenhouse, with winding paths in a well maintained garden. This is also a diving centre. 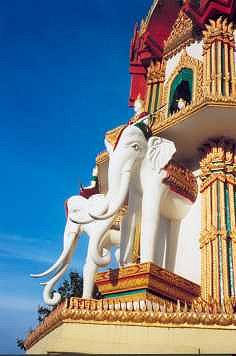 The further south you travel, the more spectacular limestone rock formations tower above the rice fields and coconut groves. In more and more villages you'll see not only the ubiquitous Buddhist wats (temples), but also mosques -- there are many Muslims in the south of Thailand. The different culture is also noticeable in the food. It's quite a bit spicier than in the north and you'll find typical Muslim dishes like roti, pancakes with condensed milk and sugar.
For a detour to the holiday islands of Ko Samui en Ko Phangan you'll have to pass through the busy and rather messy town of Surat Thani. Most ferries to Koh Samui depart from Don Sak, around 50 km east of Surat Tani. Otherwise, when you plan to ride westwards directly to Phuket and Krabi, it's possible to avoid Surat Thani by spending the night in Phunpin, 15 km west of the town, where there's also a train station on the north-south line. 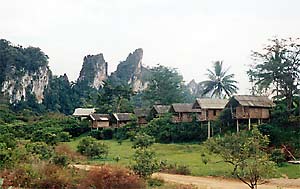 Surat Thani is a good point to cross the isthmus to the west, continuing the ride along the Andaman Sea. Route 401 passes the watershed crossing a low ridge without too much traffic. At km 109 there's a turn for Khao Sok National Park. Near the entrance you'll find a good choice of accommodation, varying from simple "jungle huts" on stilts to luxurious bungalows. There's a network of signposted walks in the nature reserve, but don't count on seeing any wildlife, apart from leeches and an occasional monkey. It's also possible to make a jeep trip to an artificial lake in the surroundings and for the more ambitious hikers there are jungle expeditions of several days with a guide. 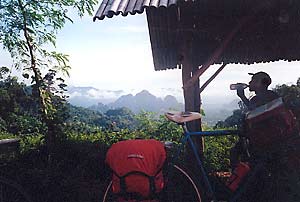 Elephants, bears and tigers live in the nature reserve, but they aren't frequently seen. Chances of hearing howling gibbons and wing flapping hornbills are better. And with a little luck you'll stumble across a rafflesia, the biggest flower in the world, which spreads a disgusting cadaver smell. 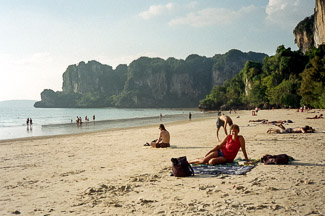 Once the beaches around Krabi were a secret only known to intrepid backpackers, but that's definitely a thing of the past. Nowadays the beautiful beach of Raileh, struck by the tsunami of December 2004 and framed by spectacular limestone rocks, is full of sunbathing westerners. A colourful mix of beautiful people, dopey characters, couples and families enjoys the beach life here and there's also quite a climbing scene around the rocks.
This could be the perfect beach, if it wasn't for the crowds and the continuous roar of the outboard motors of the water taxis transferring tourists to and from Ao Nang and Ao Phranang. Accommodation is plentiful and varied on the peninsula of Raileh and in Ao Nang, but it doesn't come cheap anymore. Don't forget to take a trip to the islands off the coast that's advertised everywhere around town – the snorkelling in the clear water is excellent and you'll enjoy the beautiful views of the pristine sand beaches and steep limestone rocks rising out of the Andaman Sea. 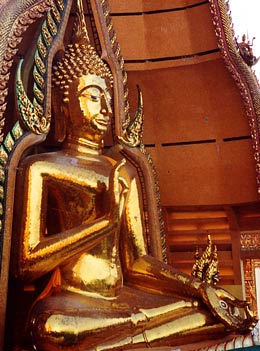 There's a wide choice of flights from Europe to Bangkok but it's essential to book a long time ahead as it's one of the most popular destinations in Asia. Usually it's no problem to book an onward domestic flight at the airport of Bangkok. Ko Samui, Phuket and Krabi have direct flight connections with Bangkok. There are also direct night buses for those who don't mind icy cold AC, reckless drivers and stops in the middle of the night for meals.

Hotels in Thailand usually give value for money. There's no shortage of accommodation along the route to the south -- every town of any size will have a simple hotel. If you book ahead on the internet, for example with asiatravel, you can get good deals for luxury hotels in destinations like Bangkok, Phuket, Phattaya and Chang Mai.

The Thai kitchen is varied and has an excellent reputation as it uses fresh ingredients which are cooked on the spot. On Thai markets -- where food is generally safe -- as well as in restaurants you'll eat better than anywhere else in Southeast Asia (except for Singapore, maybe). A lot of information on Thai cooking can be found in World Food Thailand by Joe Cummings.
The further south you travel, the spicier the food. Especially in Muslim restaurants extremely hot curries may be served. Don't be alarmed, there are always a few mild dishes available..