Toll roads and tolls in Europe 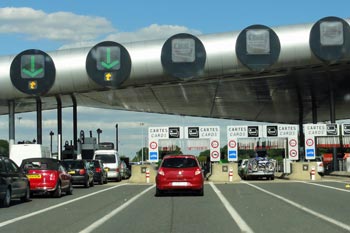 Toll fares can take quite a chunk of the travel budget. A return trip by car to the South of France from the Netherlands quickly amounts to around € 120 in tolls (without a caravan), but toll roads are relatively quiet and generally in good condition, so speedy travel is almost guaranteed. However, fuel along the toll roads and motorways is considerably more expensive than elsewhere. So check our webpage with tips for cheaper car refueling in Europe near the motorway. 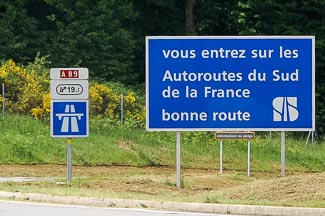 If you prefer to avoid toll roads, set this option in your navigation system or do not follow the signs Péage (France; follow par RN), Pedaggio (Italy) or Peaje (Spain). Keep in mind that many toll-free roads in France and Italy that serve as an alternative to the toll road are plagued by heavy truck traffic and are extremely busy. Relaxed driving or making good progress is hardly an option. Some motorways in France (map with toll-free autoroutes in gray), Spain (autovias) and southern Italy are toll free. These are also indicated on the Michelin maps.

Look for toll rates and more on our special France page

Spain has two types of motorways: the autopistas (AP numbering, C32 and C33 in Catalonia), where you have to pay toll, and the autovías (A numbering), which are toll free. The autovias are busier and curvier than the autopistas and have many more exits (often with a short insert lane), but the maximum speed is the same (120 km/h), except on a number of busy routes, where 100 km/h limitation applies. Along the Spanish east coast, the A7 autovía between Barcelona and Andalusia is partly an almost equally fast, free alternative to the expensive AP7 toll road. As of May 2018, the toll for some popular holiday routes for a passenger car is:

Paying tolls in Spain is easy and fast with a credit card -- choose the lane with the credit card symbol and sometimes the word tarjetas.

The toll rates in Italy have risen sharply in recent years. The toll for some well-known holiday routes is as of May 2018 for a motorcycle and most passenger cars and combis (height of 1.30 m of less above the front axle, so not Fiat Ducato or Citroën Jumper):

For toll rates, see also the official site of the Italian toll companies.

Paying toll in Italy is the fastest with a credit card. Choose the blue lanes with Carte/Viacard. In Italy, many (but not all!) toll stations now also have the Maestro logo, so that payment by debit card is possible there. You only have to insert the bank card into the slot and don’t have to enter your pin code.

For toll rates, see the official site of the Portuguese toll company Brisa. On this company's toll roads you can pay with a credit card or cash. On other toll roads (including the important A22 in the Algarve) you can often only pay electronically (indicated by the sign on the right), via a very complicated system. For more information, see the Portugal page of the ANWB. 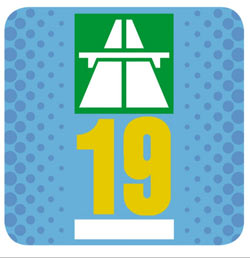 In Switzerland a vignette is required for the motorways. Such a vignette for the Swiss motorways (pdf Nationalstrassen) costs 40 CHF or € 36.50, payable for each motorcycle, car, caravan or trailer (!). The vignette for 2019 is valid from December 1, 2018 to January 31, 2020 and is available at automobile clubs in Europe, at the Swiss border and in Switzerland at gas stations and post offices. Fine for violation: 200 CHF and the cost of a vignette. The fine for a fraudulously attached vignette is even higher. 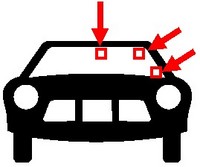 Buy the Swiss vignette at a gas station in Southern Germany. This costs around € 1 more but can save waiting time at the border, although the line for cars with vignette is often longer at the Weil am Rhein / Basel border crossing (A5). If you pay the vignette at the Swiss border with a € 50 note, you will receive 10 CHF change. It is most advantageous to pay the vignette at the border with a debit card or credit card in Swiss Francs. The price is then approximately € 36.50, depending on the daily rate. 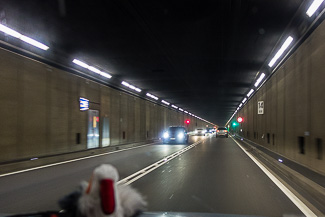 You do not have to pay a separate toll for car tunnels in Switzerland, except for the Grand St. Bernard tunnel on the border with Italy (30 CHF or € 28, with caravan or camper CHF 46 or € 43, motorcycle € 16 or 17 CHF; there are also 20% cheaper return tickets that are valid for 1 month). The Gotthard tunnel is the most important connection between Switzerland and Italy. Because the tunnel is (and remains) only two lanes, there is almost always a traffic jam. Access is regulated with traffic lights. The Swiss radio DRS1 regularly reports how long the delay is; two hours is not unusual in high season. An alternative at times of busy traffic is to take the pass route or to drive through the San Bernardo tunnel.

An overview of open and closed mountain passes in Germany, Switzerland, Austria, France and Italy can be found on Alpenpässe.co. 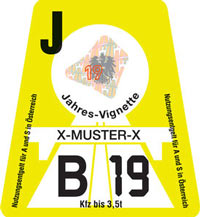 Austria has tolls for driving on the motorways (A-roads) and various other roads (S-roads). An Autobahnvignet is mandatory and is available at automobile clubs and further on at the border and at gas stations in and around Austria. There is a weekly vignette (10 consecutive days) of € 9, a 2-month vignette of € 26.20 and an annual vignette of € 87.30 (valid from December 2017 to January 2019). No extra charge for a trailer or caravan, motorbikes pay € 5.20, € 13.10 and € 34.70.
You can also purchase the Austrian autobahn sticker in a digital version via the internet, then it will be linked to your license plate and you don't have to put a vignette on your windshield. Note: the digital vignette is only activated after 18 days, so order it at least three weeks before you travel. The adhesive sticker will continue to exist. The penalty for a missing vignette is at least € 120 ("Ersatzmaut"), but can also be much higher if you cannot pay on the spot, from € 300 to € 3000. In addition to the vignette, Austria also has tolls for a number of tunnels and mountain routes. For example, the Brenner Autobahn costs € 9.50 for a passenger car, the Karawankentunnel € 7.20, the Tauern motorway with the Tauern tunnel and Katschberg tunnel € 11.50 (each way and the tourist-interesting Großglocknerstraße € 36 (for a whole day, motorcycle € 26). A motorway vignette is not required for these special routes. 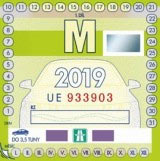 In the Czech Republic, most motorways require a vignette, which is available at the border and at large gas stations. For passenger cars (including a trailer) the rate for 7 days is: CKZ 310 (approximately € 11), for 1 month CKZ 440 (approximately € 16) and for 1 year CKZ 1500 (approximately € 54). The annual stickers for 2017 are valid until January 31, 2018. Motorbikes are exempt from the toll obligation.

An electronic vignette is required for a number of motorway sections in Slovakia; you must specify the license plate number and country where the car is registered. Checks take place with cameras and you will no longer receive a sticker. The e-vignette costs € 10 for 10 days, € 14 for 1 month and € 50 for 1 year, with or without a caravan. The electronic vignette can be ordered online (payment by credit card) and can also be purchased at the border and at gas stations.

In Hungary, a toll sticker is required for almost all motorways and some other roads. The windshield vignette has been abolished, you now have to purchase an "e-vignette" at the border or at a gas station. This means that you have your car registration number entered into the toll registration system against payment of the toll rate - you will only receive a proof of payment. Motorways are checked automatically on the basis of the number plates entered in the system. A weekly vignette (valid for 10 days) for a passenger car with or without trailer costs HUF 2975 trailer (€ 10) and a monthly voucher HUF 4780 (€ 15). Campers pay double, heavy campers (> 3500 kg) even more than four times as much. If you drive on the highway without registration, the fine can be over € 400. 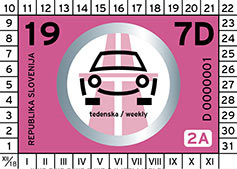 In Slovenia, a vignette is compulsory for motorways up to 3.5 tonnes. This has replaced the toll. For heavier cars, the toll will continue for the time being. There are vignettes for a week (€ 15 for cars with or without trailers, € 7.50 for motorbikes), a month (€ 30) and a calendar year (€ 110 / motorbikes € 47.50) for sale. Note: cars up to 3.5 tonnes with a height above the front axle of more than 1.30 meters (PDF list) pay a double rate, so € 30 for a week and € 60 for a month.
The vignettes are for sale at toll stations, supermarkets and gas stations in Slovenia and at gas stations in neighboring countries (border region). The vignette is not valid in the Karawankentunnel (Austria-Slovenia border). For this tunnel you pay an additional € 7.20 with or without a caravan. 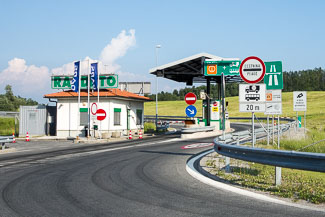 Pay attention: Many tourists drive only a short distance on the Slovenian highway from Trieste to Koper in Istria, on their way to Croatia. A vignette is also needed there, and intensive checks are carried out. If you want to avoid this highway, drive via the Italian village Muggia along the coastal road to Koper, or follow the slightly faster shortcut along Plavje (pay attention, see video!). Whoever is stopped on the highway in Slovenia without a vignette, pays a minimum fine of € 300.

In Croatia you pay toll on the motorways. At the toll gates you can pay with kuna, euro or credit card. Some rates (see also the Croatian toll company): A7 Rijeka-Rupa: 8 kn (15 with caravan) Umag - Pula (Istria): 37 kn (58 with caravan) Tunnel Ucka: 28 kn (40 with caravan)

Belgium has one toll tunnel, the Liefkenshoektunnel in Antwerp. The rate for a passenger car is € 4.95 if you pay with a credit card (no debit card) in the automatic lane (blue arrow) and € 6 if you pay in cash. Vehicle that are higher than 2.75 meters (some campers!) pay € 17.60 or € 19 each way. The Liefkenshoek tunnel can be an alternative to the busy Antwerp ring road, for example if there is a traffic jam at the free Kennedytunnel.

From Breda (E17) the signs will send you in the direction of Bruges through the Liefkenshoek tunnel, after which you must follow the E34, which is only partly a motorway; it is usually faster (and cheaper) to choose the E17 towards Ghent through the toll-free Kennedy tunnel. In the event of major traffic problems, the Liefkenshoek tunnel can be free; this will be announced on the information boards.

In Denmark you pay toll for the Storebaelt Bridge, which connects the islands of Fünen and Zealand in the route to Copenhagen. The rate is approximately € 34 for a passenger car up to 6 meters (with or without a trailer) and for cars with or without a caravan that are longer than 6 meters approximately € 51. The Öresund bridge between Copenhagen and Malmö in Sweden is also subject to a toll; here you pay € 48 for a passenger car up to 6 meters and € 96 for a car with a caravan or camper.

A very comprehensive overview of European toll rates can be found at the Belgian mobility club VAB (Toll rates).